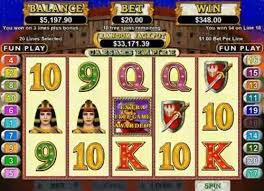 You will be stepping back into time if you choose to play the Caesars Empire slot, and that will be to the Roman Era of course! This may be one of the older Real Series slots but it still has a lot going for it as you are about to discover!

In total you have 20 optional paylines on offer, so you can of course choose to play it with as many pay lines in play as you like.

However, in regards to the staking options being a Real Time Gaming slot you do have plenty of them on offer, but if you like to low roll then one cent coin value settings are on offer.

In fact, one of the best aspects about the Caesars Empire slot in addition to its bonus games that we are going to enlighten you about shortly in the section below is that this slot comes with a completely randomly awarded progressive jackpot.

As long as you are playing this slot for real money then no matter what stake level you play it for you will always shave the chance of being awarded with that jackpot, which is awarded for reference at the end of any paid for base game spin!

On the first four reels of the Caesars Empire slot game you will find there are Gold Coins that can and will eventually be spun in. When one appears in a winning combination then it will triple the value of that winning combination as those symbols are all Wild Multiplier symbols!

However, it is the bonus game that every player of this slot will want to trigger as often as they possibly can for that bonus game is quite famed for banging out some very high valued winning payouts from time to time.

For you to trigger the bonus game you need to have spun in on the first reel a Caesar reel symbols on any position on that reel and in the same base game spin you need to get the Coliseum reel symbols landing anywhere on the firth reel.

By doing so you will then get to play of a set of 10 free spins on the same stakes and with the same number of payline as you activated on the triggering spin. To help you hopefully win big during the bonus round feature game any and all winning payouts are going to be doubled in value.

Our Opinion of the Caesars Empire Slot

One thing that has often put us off playing RTG slot games is that the operators of the casino sites that utilize their gaming platform and their range of games have the ability of choosing one of three different RTP’s for their slots.

Whilst they cannot just choose those RTP’s at will, you are therefore going to have to hunt around for a casinos site that has the highest paying pay table attached to their slot games, which may take up a lot of time and effort.

However, what we have noticed is that all Real Time Gaming powered casinos sites do tend to offer some huge valued deposit match bonuses to their slot playing customers, and as such you will always find plenty of casinos sites offering you such bonuses.

Just keep in mind however one of the downsides of playing at a casino site offering lots of generous bonus offers is that those bonuses are often compensated with the fact the RTP’s of slot games such as the Caesars Empire slot game may not be the very highest ones available!