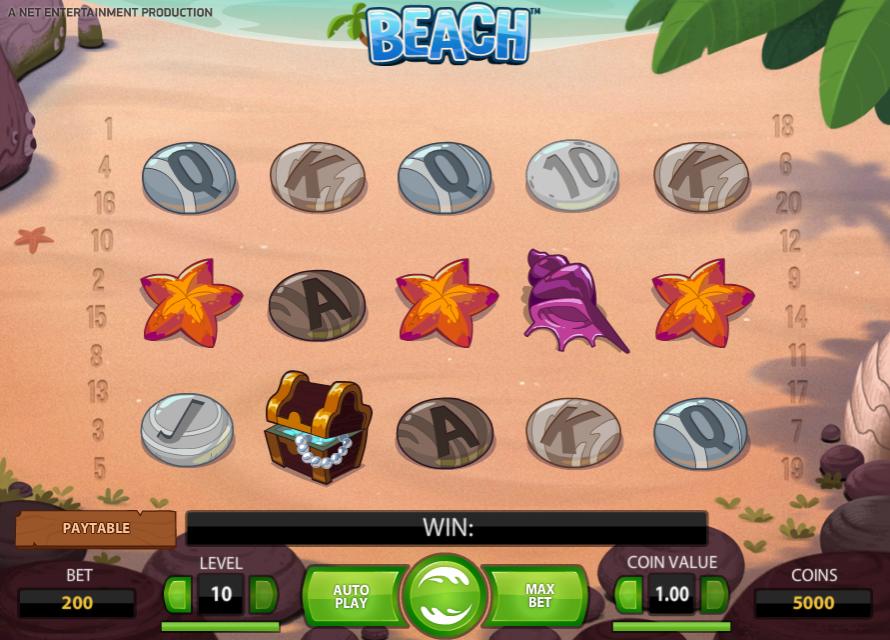 The Beach slot, as the name suggests, has been designed and themed around a tropical beach, and one of the main differences between this slot game and all other slots is that the reel symbols roll onto the screen via a wave type animation and not by spinning in!

Therefore you will notice it comes with some high definition graphics and animations and the sound effects are very unique too, so it will certain be one of the more interesting NetEnt instant play slot games you could end up playing online.

One thing that you have no control over when playing the Beach slot however is the number of paylines you can send into live play and activate. This slot is one of many fixed paylines slot from NetEnt and as such when playing it you have to play all 20 pay lines per spin.

That is not necessarily going to mean this slot is an expensive one to play for you can also play one to ten coins per line on coin values set as low as a penny per spin. The way this slot has been designed means you have the chance of winning up to 40,000 from one spin!

Each time the Octopus Wild reel symbols spin in on the middle reel that symbol can and probably will help you form plenty of additional winning payouts. For what it will do is transform up to two symbols in play on the screen into additional wild symbols, so do be on the lookout for that symbol spinning in as plenty of extra winning combinations may just be formed when it does so.

There are also some fairly standard wild symbols in play on the reels and the only reel symbols they do not stand in for are the bonus game awarding bonus scatter symbols.

The bonus game is a set of free spins, however due to the wave like playing format of this slot game those free spins are known as free waves and not free spins!

Our Opinion of the Beach Slot

Playing the Beach slot will of course see you having to get used to the way in which the reel symbols appear on the screen via a wave like formation, however to be honest that will not take you very long to get used too.

We did like the Octopus Wild symbol attached only to the middle reel we just hoped it has been added to the other reels too! The way in which that symbol can randomly spring to life and turn additional symbols wild too will certain see you hoping it does spin in as often as possible!

The only criticism of this slot we have is that you are obviously going to see more sets of three scatter symbols spinning in as opposed to four or five of them, however the more scatters that do appear anywhere on the screen the more free waves as the free spin are known you will be awarded.

Playing off just 8 free waves is not as exciting as getting more of them, however the saving grace of this NetEnt slot it that its payout percentage is set high at 96.80%.