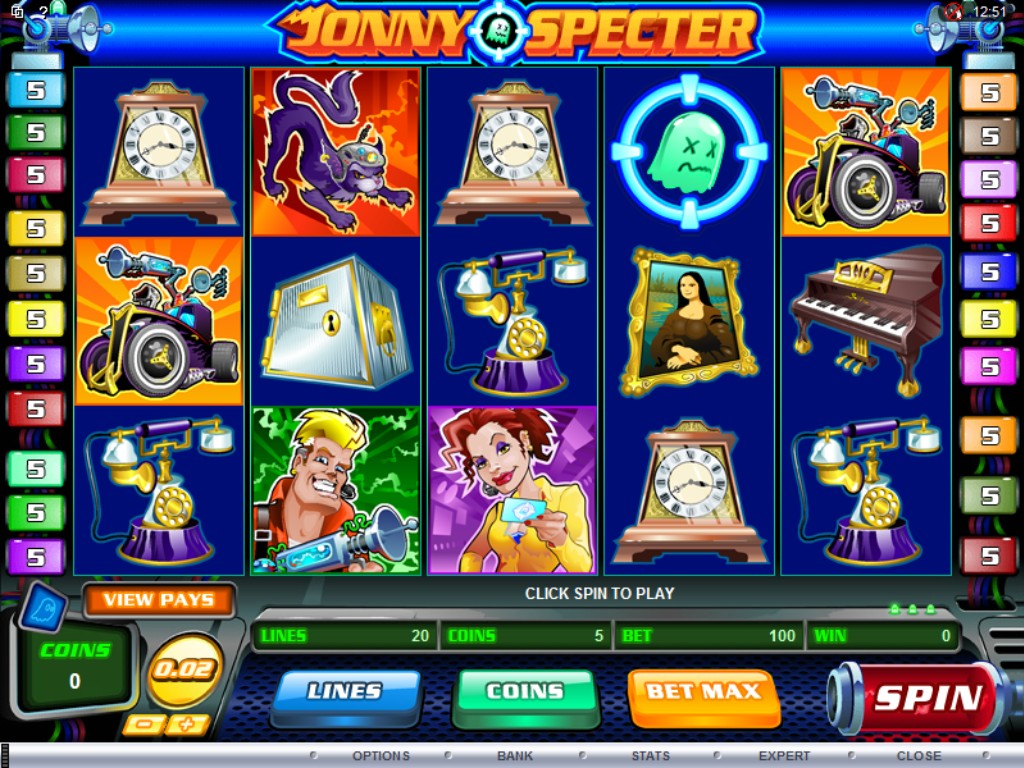 The Jonny Spectre slot was one of the very first slot games from Microgaming to feature something known as a Wandering Wild symbol, and as such when playing it you will see that symbol moving around the screen before it attaches itself to one of the reel positions.

The benefit of that additional symbol is that you are always going to have at least one reel position wild and on many occasions when playing this slot it will help you form at least one winning combination, which does add another level or excitement to the slots playing structure and format.

This slot is a 20 optional payline slot and as such it is a very affordable slot, even if you are playing with just a small bankroll as you can lower both the number of lines you have in place in addition to the number of pay lines you activate so low stake players will enjoy playing it. However, no matter how much you wager per spin you do have the chance of a winning a 3000 coin base game jackpot!

A Greedy Ghost reel symbol will meander around the screen when you are playing off each spin on the Jonny Specter slot game and at the end of each spin it will attach itself to one of the fifteen in view reel positions and will make that position wild.

There is also some Ghost themed scatters that can also be spun in, those symbols are the ones that will trigger a set of free spins as soon as you have spun in at least three of them. A set of 13 free spins will be awarded when three, four or all five of those scatter symbols spin in.

The free spins can also be re-trigger as you play each one off in the same way as on the base game and winning combinations that you form during the free spins round are doubled in value, the Greedy Ghost Wild symbol is also in play during the bonus game too!

A secondary base game bonus feature is awarded each time you spin in the Mansion reel symbol on the fifth reel. When awarded the symbol will expand sideways to reveal three bonus symbols and you must click on one of them to reveal a cash award.

Our Opinion of the Jonny Specter Slot

Whilst the Wandering Wild reel symbol is certainly very unique, after a few near misses when you are playing this slot it can turn out to be something of an annoying reel symbol.

There have been numerous times when we have been playing this slot when that symbol could have helped up form some very high paying winning combinations if it had landed in the right reel position! However, as is often the case that symbol instead of landing where we wanted it to land it landed somewhere else instead!

Therefore if you do decide to play this slot you are going to have to get used to those near misses, however there will come a time when, like us, you find it an annoying reel symbol!

The best way to judge for yourself whether everything on offer on the Jonny Spectre slot game is to your liking will be to give it some play time online, and one little piece of information that may help you make up your mind as to whether you will want to play it or not is its long term expected payout percentage which for reference is set at 95.48%!