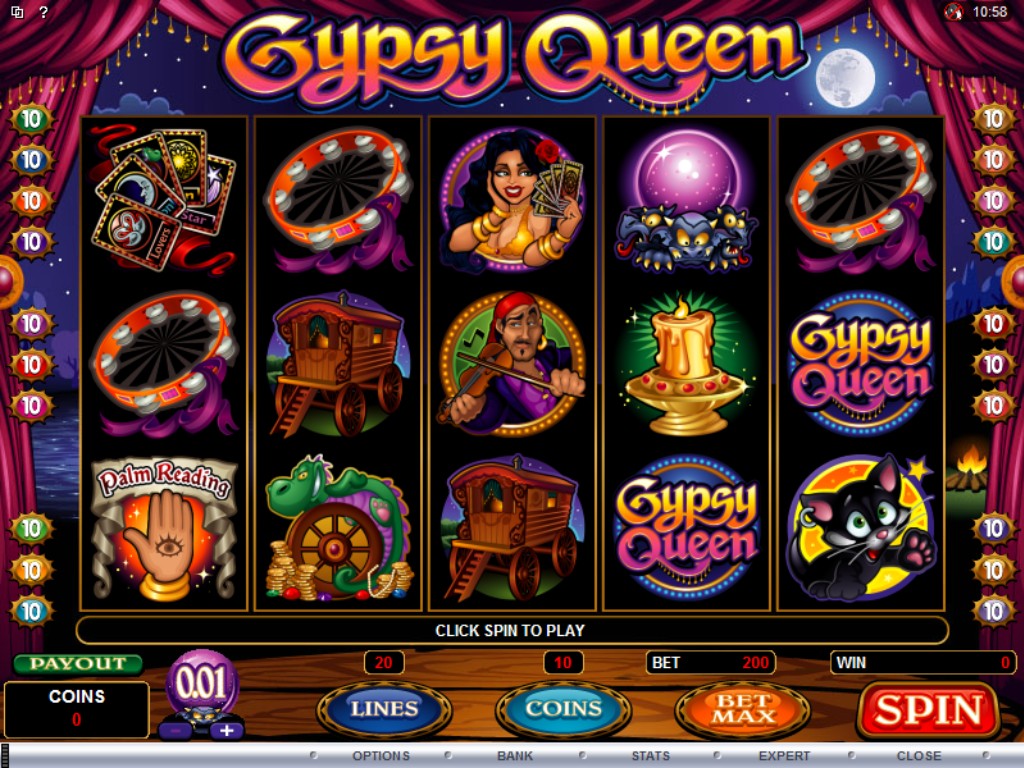 You will notice that the Gypsy Queen Slot game has a complete set of unique reel symbols which is always good to see, as you can get very tired of seeing the usual playing card reel symbols spinning in which most Microgaming slots games have attached to their reels!

In fact, this is something of an all singing and all dancing slot for it comes with animated reel symbols and sampled sound effects which does bring it to life. Plus, with 20 paylines on offer and plenty of staking options you will also be able to set each spin spinning on a stake level you can afford to play it for.

There is however just one bonus game that could be awarded to you, however it only takes two scatter symbols to trigger that bonus game which will award one of two different bonus games! So there is an element of excitement attached to it when it is triggered as you will never know in advance just which bonus game you will then get to play off! Below you will find an overview of both of those bonus games.

The Gypsy Queen slot game has a bonus game that is triggered when only two or more scatter symbols spin in from left to right on the screen, and as such you are likely to trigger it way more often that when playing most other video slots!

In fact, you are not going to trigger the same type of bonus games as soon as you do spin in enough of the scatter symbols for there are two bonus games on offer on this slot one of which will be randomly selected when the bonus game has been triggered.

So it does go without saying you will be hoping the free spins feature is awarded to you more than the pick to win bonus game as you can win more when playing off that bonus game!

Our Opinion of the Gypsy Queen Slot

The one thing we have noticed as we are playing more and more slot games from Microgaming is that a huge number of them offer either some form of pick and win bonus game along with a free spins bonus game.

However, what we did like about the way that they designed the Gypsy Queen slot is that you will never know just which bonus game you will end up playing off until you spin in enough bonus symbols.

In fact, as both of the bonus games are triggered by the same set of reel symbols and you only need two of them to spin in from left to right this is the type of slot that can and often does award those bonus games very frequently.

As most slot players will be hoping to trigger the bonus games on any slots they are playing then this is one we would encourage you to play! Much more so thanks to the fact that its long term expected payout percentage is a very generous 95.08%, so you will at the very least get a fair chance of winning if you do play it!