Pixies of the Forest Slot Review

Pixies of the Forest Overview 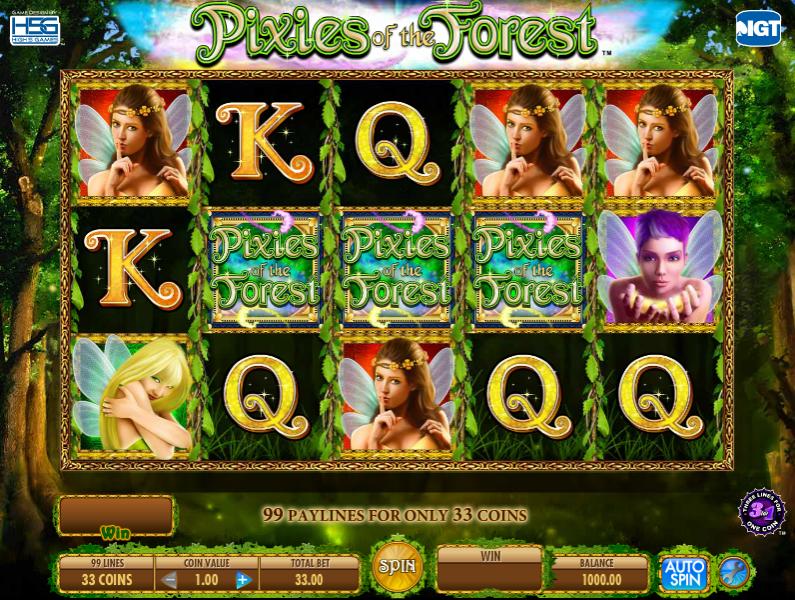 Pixies of the Forest Features

Pixies of the Forest Basics

Pixies of the Forest Free Play (Desktop Only)

Detailed Pixies of the Forest Review

There are two quite different things to be found on the Pixies of the Forest slot game that you will not find on many other slots! The first being that it is a slot offering 99 fixed pay lines but for just a stake of 33 coins and it is also a slot on which you will famed the unique Tumbling Reels playing format that is found on a handful of other IGT designed slot games.

The Tumbling Reels feature gives players the chance of winning multiple times off a single spin. When you play off an initial base game spin if you form one or more winning combinations then you are awarded with the payouts associated with the matching reel symbols then those symbols are taken off the screen.

The logo symbols are going to award you with a 2000 coin jackpot payout if they line up on any of the 99 paylines you have in play per spin of the reels of this slot game.

Spinning in the three Bonus symbols anywhere in view will see you first having to select one of those symbols by clicking onto it and by doing so you will then be awarded with a set of free spins as display on the symbol you have clicked.

The Wild symbols are on the middle three reels only via the base game, however during the bonus free spins round they are added onto the first reel too so you can spin in wild symbols during the free spins bonus game on reels one, two, three and four.

The only other thing that you do need to be aware of as you are playing off the bonus free spins game is that you cannot re-trigger it!

Our Opinion of the Pixies of the Forest Slot

Try not to be put off playing this slot game online due to its payout percentage falling in between the 93.00% to 94.90% ranges, for we have found that over the short term you can have some very high paying sessions with a little bit of luck, which is true to say of all IGT slot machines.

The best aspect of the Pixies of the Forest slot game is that to play off 99 pay lines you only have to pay 33 coins per spin. However a quick glance at the pay table will reveal that some of the winning combinations that can be formed are very low paying ones.

In fact, this slot does boast a low variance type of playing structure which actually may be very suitable to you if you want to play slot games online for low stakes but have plenty of chance of winning.

We found that after playing this slot for a fair amount of time you do tend to get bored with its playing format, unless of course you manage to trigger the free spins bonus game for that bonus game can often be a high paying one and an exciting one to watch playing off too.