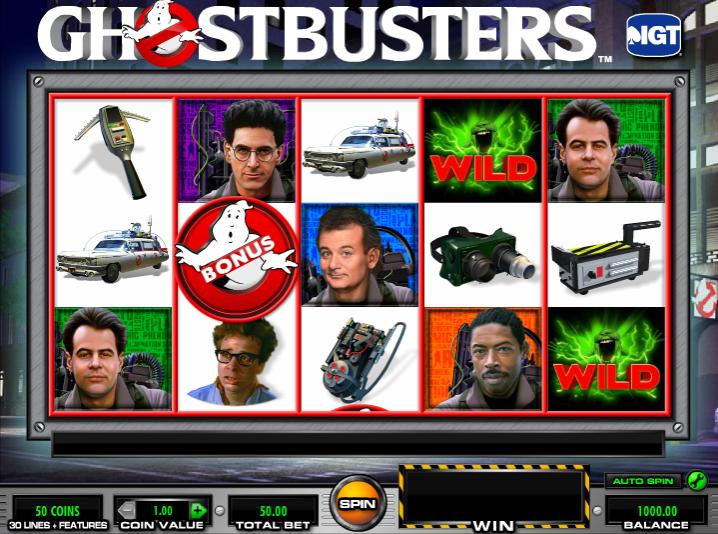 The Ghostbusters slot from IGT is one of many of their multi-stake video slots that are completely themed around a blockbusting movie and we will let you work out what movie that is, however a clue is in the name of this slot!

The way in which IGT have chosen to structure and design this slot is that each base game spin will cost you 50 coins per spin or an increment of 50 coins and in exchange for those 50 coins you will be playing off per spin 30 fixed pay lines and a 20 coin forced bonus bet wager will also be placed for you.

The side bet forced wager is going to then see you having the ability of triggering a large number of completely random bonus features on any spin you play off, and those four randomly awarded bonus games are in addition to two additional bonus games that can also be triggered but via a set of spun in bonus and scatter symbols.

Probably the best part of the Ghostbusters slot game is that you should see the bonus features being triggered and awarded to you much more often than many other slot games award their respective bonus features.

Whilst you are paying for the privilege of triggering those features via the forced bonus bet wager there are in fact four quite different randomly bonus features and two bonus symbol triggered bonus features that can be awarded to you when playing this slot online.

The first feature is a randomly awarded multiplier, that multiplier when triggered will be displayed on the screen and any winning combinations formed on that spin will be boosted by the value of the multiplier which can be from x2 to x5 in value.

A random cash award may suddenly be awarded to you worth between 50 coins and 1000 coins. Another randomly awarded feature is the Wild Reels feature and when triggered one to three of the reels are chosen to be turned into completely wild reels.

Extra Wild symbols could also be added to the reels via another randomly warded feature and as such when that feature is awarded the more wild symbols added to the reels the better! Spinning in the three Bonus symbols on the middle three reels in the same base game spins awards a set of 8 free spins on which Locking Wilds can come into play.

An additional Ghost Shooting based bonus game can also be awarded to you and you are faced with picking off location displayed on the bonus game in the hope you blast a Ghost and win a cash prize for doing so!

Our Opinion of the Ghostbusters Slot

If you do like the look and sound of this slot then keep in mind much like all of the other many IGT slot you can play online its long term RTP has been fully certified. As such over the long term you will find this slot has been designed to payout 92.50% to 94.50% of player’s stakes as winning payouts.

As most of the bonus games attached and on offer on the IGT designed Ghostbusters slot are randomly awarded then you will find that with so many of them available you can see them triggering in fairly quick succession. Just keep in mind that some of those bonus games may be very low paying ones or even bonus games that do not award you with anything!

However, there will be a chance they could turn out to be high paying bonus features which is why this slot is fun to play and an exciting slot game too!